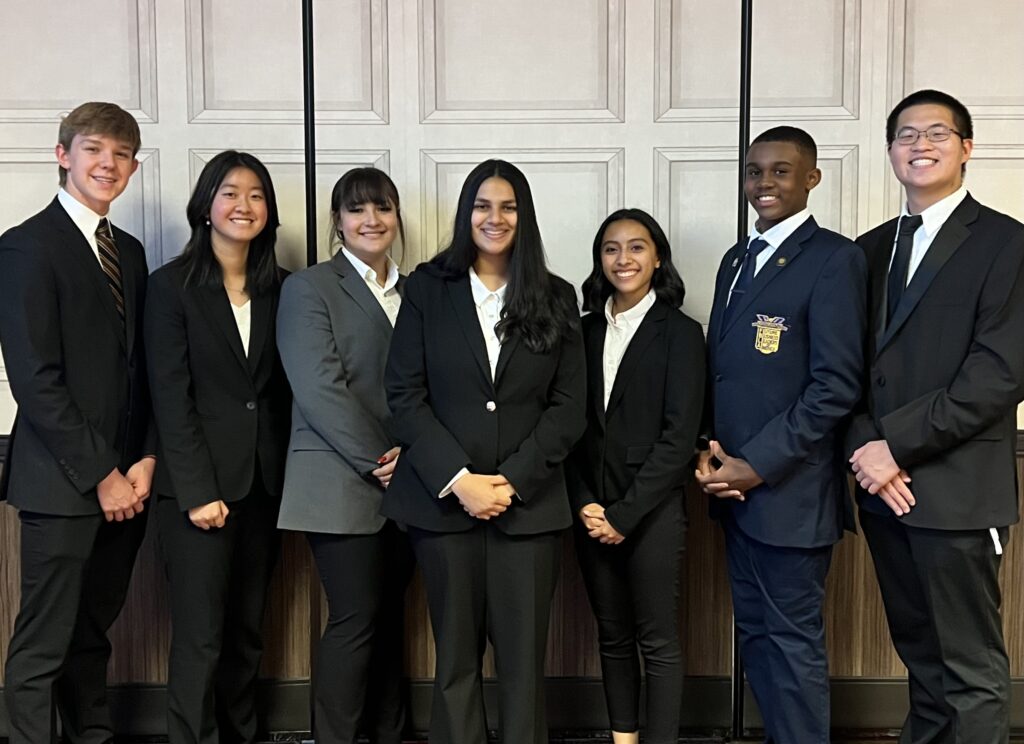 Nevada FBLA Officers are elected by their peers at the State Leadership Conference and represent Nevada’s membership. The State Officer team develops a program of work aligned to the strategic goals of Nevada FBLA. Throughout the year the team interacts with the membership to implement and enhance Nevada FBLA programs. 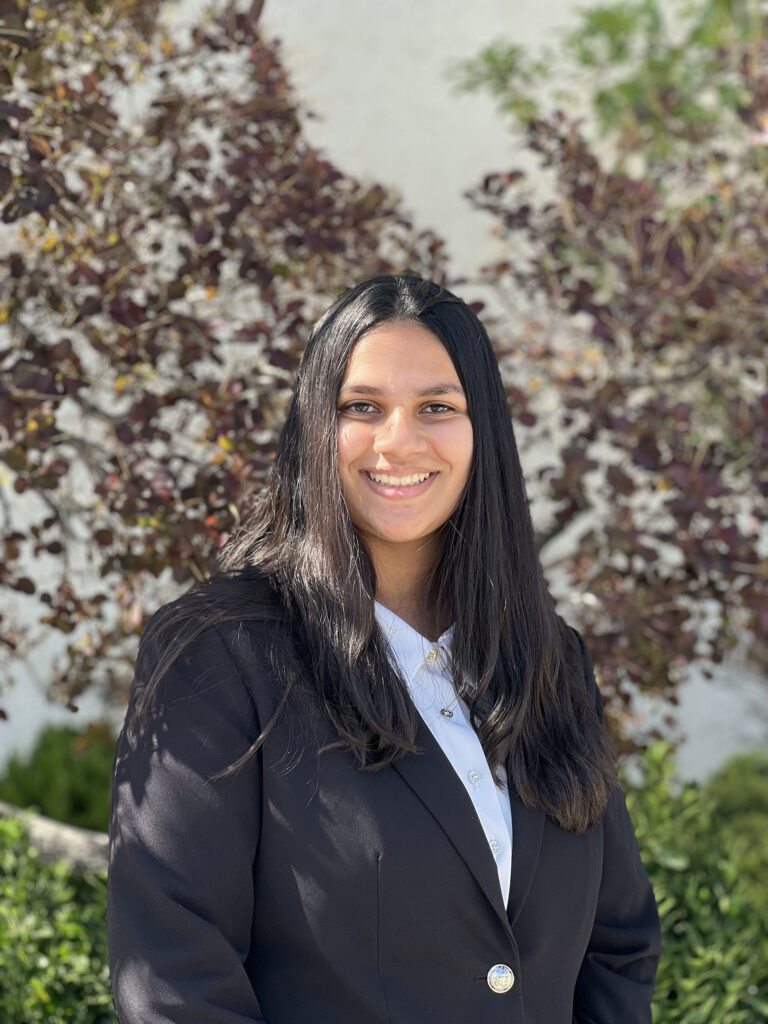 Sanjana Dixit, a three-year member of FBLA, serves as the Nevada FBLA President. Last year, she fulfilled the role of VP of Service and had the most amazing experience. She attends Clark High School in the AMSAT program as a senior. During SBLC in 2022, she placed 1st in Hospitality and Event Management, 2nd in Personal Finance, and 2nd in Marketing. She has aspirations to major in Economics or Business in college, and her dream schools are Duke University and the University of Pennsylvania. Her career goal is to make a lasting impact on her community while also maintaining her own happiness in a business career. If she were to pick a perfect dream job, it would be the General Manager of the Packers. Being an FBLA member has changed Sanjana’s life because of the friends she has made and the skills she has learned, and she cannot wait to continue this journey on the State Office team! 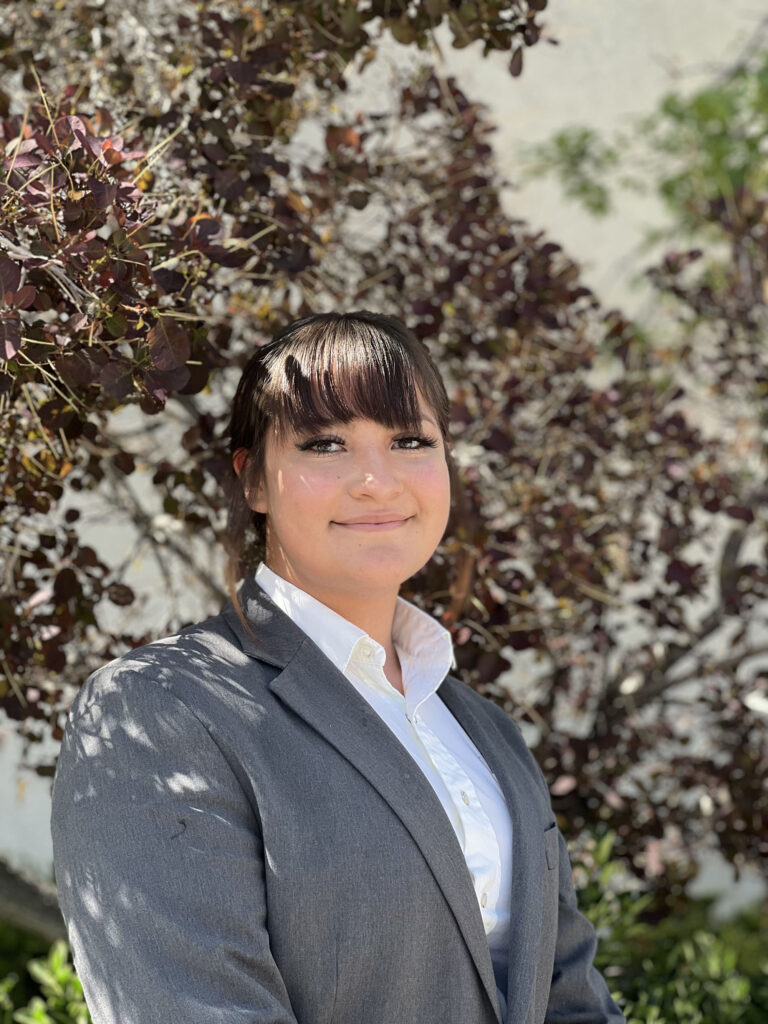 Nadia Jack, a junior from the town of Jackpot, is attending Jackpot High School and is excited to be Nevada FBLA’s 2022-2023 Eastern Region Vice President. Nadia has been an active member (for four years) since her eighth grade year. At regionals Nadia placed second for Broadcast Journalism, she also placed second in Accounting 1 her freshman year for Nevada’s SBLC. She has been highly involved in many extracurricular activities in her school. Along with FBLA she is a member of Jackpot’s National Honors Society, holds the position of secretary in Jackpot’s student council, is a member of Jackpot’s AOT team, plays varsity volleyball, is a cheerleader, and throws shotput and discus in track & field. Outside of school Nadia works at the Four Jacks Hotel & Casino in Jackpot. She spends most of her free time with friends and family. After high school Nadia plans to attend a quality university and major either in medicine or business. After college Nadia hopes to become a Pediatric Registered Nurse or go into the field of accounting. FBLA has increased Nadia’s self confidence and helped her develop many important skills necessary for being a successful leader. Nadia looks forward to learning from and working with the 2022-2023 state officer team, as well as being a part in Nevada FBLA’s success and the success of its members. She hopes to make sure other members’ experiences in FBLA are as amazing as hers have been. 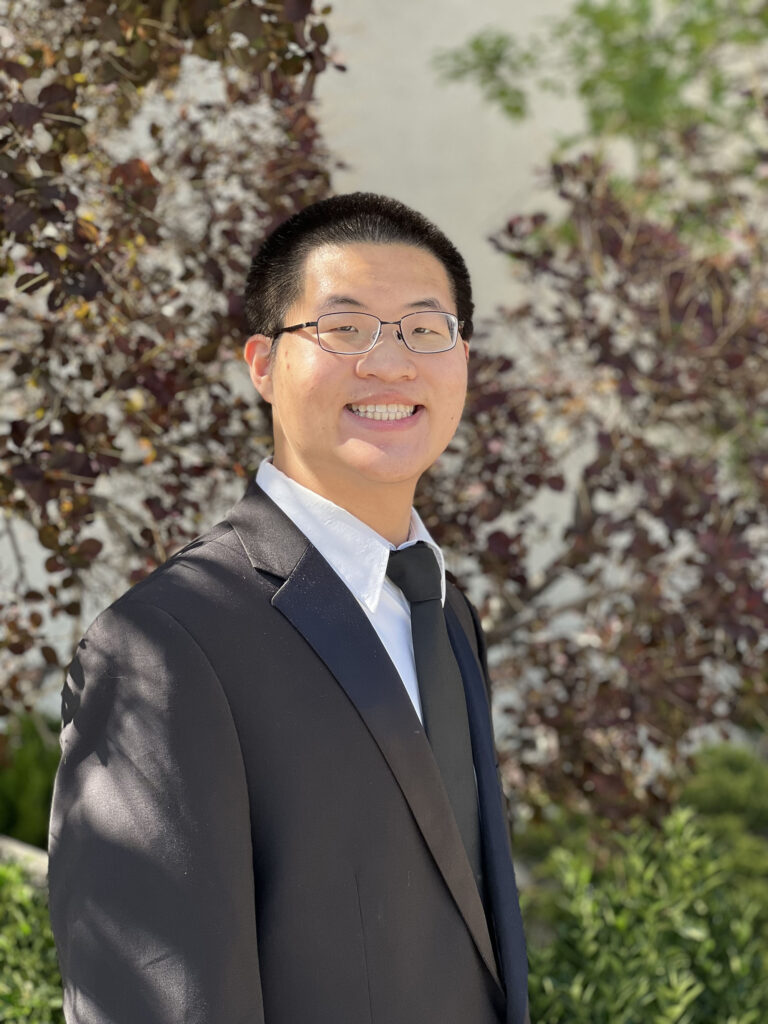 Samuel (Sam) Hwang is a student, part of the Class of 2023, attending Ed W Clark High School in Las Vegas Nevada. A rising senior, he has been a member of FBLA ever since his Freshman
year. His decision to join was largely due to one of his chapter officers, who served as a state officer in 2022, Abhay Mahajan. Under the guidance of his adviser, Kyle Peterson, and peers, as
well as his own diligence in preparation, Sam Hwang has become an accomplished member of Nevada FBLA: he earned 2nd place in two events, Banking and Financial Systems and Securities and Investments, and 1st place in one event, Global Business, during his freshman year at SBLC; 1st place in the same three events in his sophomore year at SBLC; represented Nevada in International Business during his sophomore year at NLC, winning 1st in that event; and earned 1st in all three of his events during his junior year: Banking and Financial Systems, Securities and Investments, and Insurance and Risk Management. Knowing how his own FBLA career was kickstarted by a former officer, Sam Hwang decided to run for the position of Southern Region Vice President so that he could make a positive impact in the lives of current and future members. With a continuing passion in education reform and student learning, he hopes to motivate his peers to help others in their immediate circle of influence and use the skills that they gain from FBLA to not only enrich their own learning but also the experiences of others. 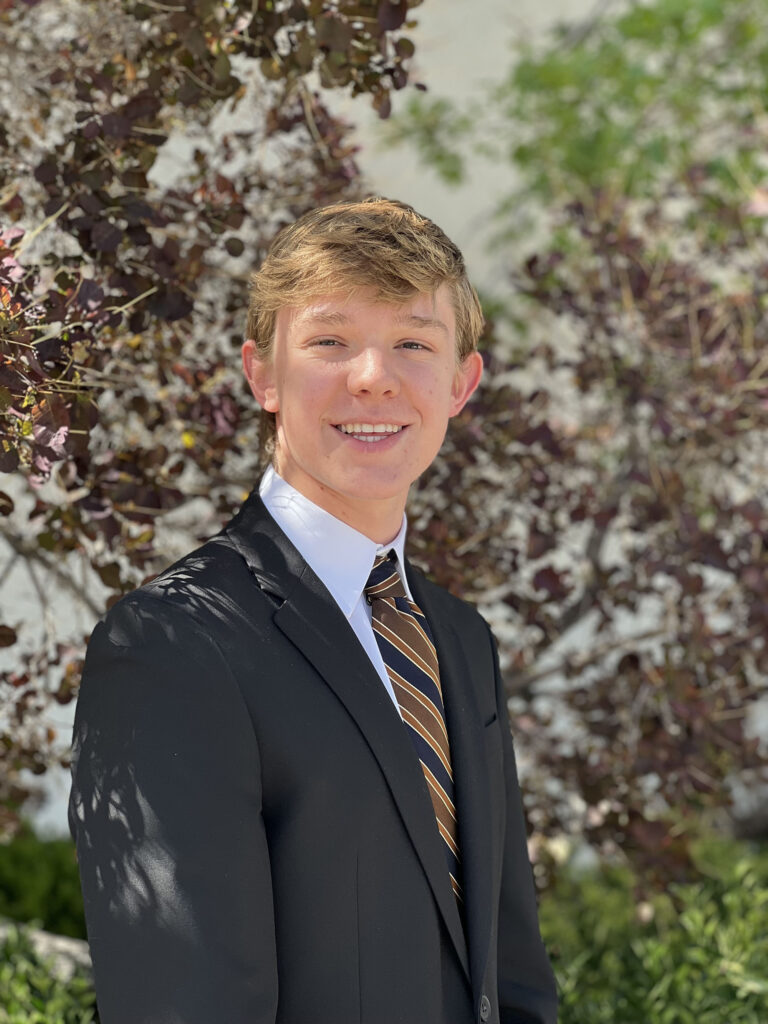 Todd Gosselin is currently enrolled at Carson High School in Nevada’s capital, Carson City. He has just finished his Sophomore year (10th) and is going into his Junior year (11th) in the 2022-2023 school year. Todd has been a part of Future Business Leaders of America (FBLA) for 2 years, beginning his FBLA journey Freshman year (9th) of high school. As a state officer, Todd is the Vice President of Northern Region. This year at the FBLA’s State Leadership Conference he placed 4th in the Introduction to Social Media Strategy event. He also took 5th in his Interview event and 6th in his Introduction to Business Calculations testing event. Todd is planning to attend University of Nevada Reno, where he wants to attain a Bachelor’s degree in
Education and Mathematics . With these degrees he is going to fulfill his dream of being a secondary math teacher. Todd strongly believes that with FBLA, students become more active in their school and increase their social skills. He has experienced this with his journey through FBLA. Because of these skills taught through FBLA, Todd has become a more active member of his high school by having the confidence to meet new people and try new things. 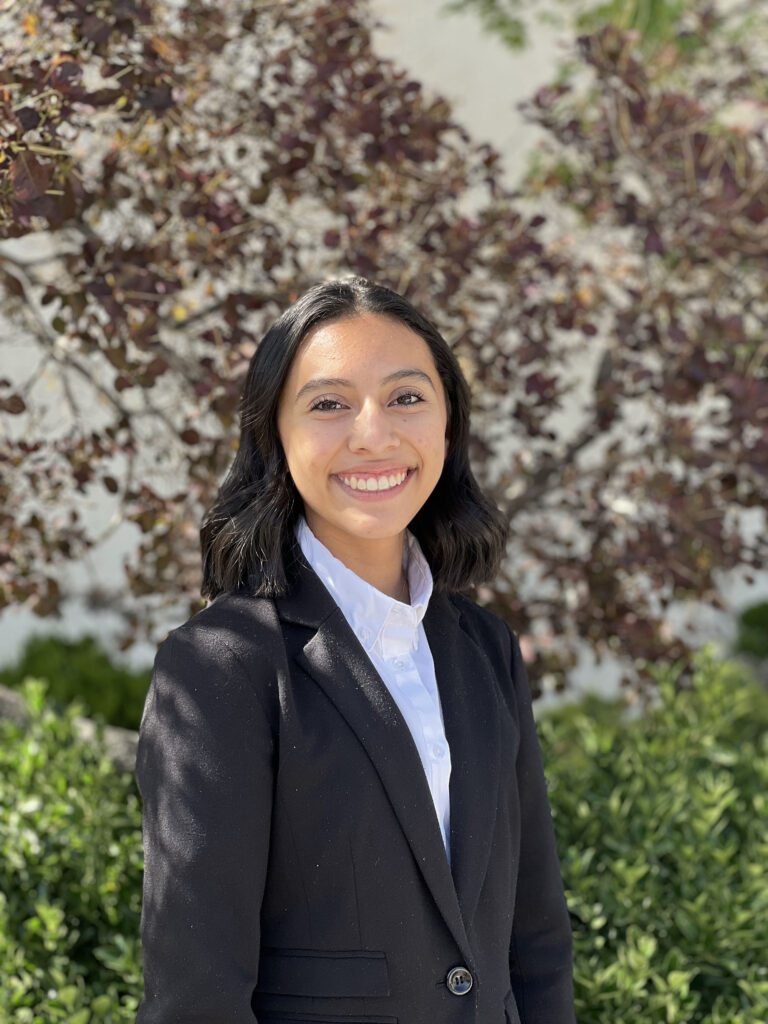 Gabriela Renteria is a junior in the business management program at West CTA. Gaby is excited to be Nevada FBLA’s Vice President of Membership for the 22-23 term. She has been an active member since her freshman year and has served as underclassmen representative and chapter president. After 2 SBLC’s she has placed, 1st in Intro to Parlimentary Procedure, 1st in Intro to FBLA, 2nd & 4th in Publication Design, 3rd in Intro to Social Media Strategies and 4th in Intro to Business Presentation.  As well as completing the champion chapter and 4 levels of business achievement awards. Outside of FBLA, she is active in DECA and Mock Trial. Gaby wants to attend college for business at a school near Nevada and attend law school to become a family lawyer. FBLA has helped grow her as a leader and a speaker, and hopes to give others the same experience while bringing more people together through FBLA. She can’t wait to meet all the awesome future leaders and help grow Nevada FBLA! 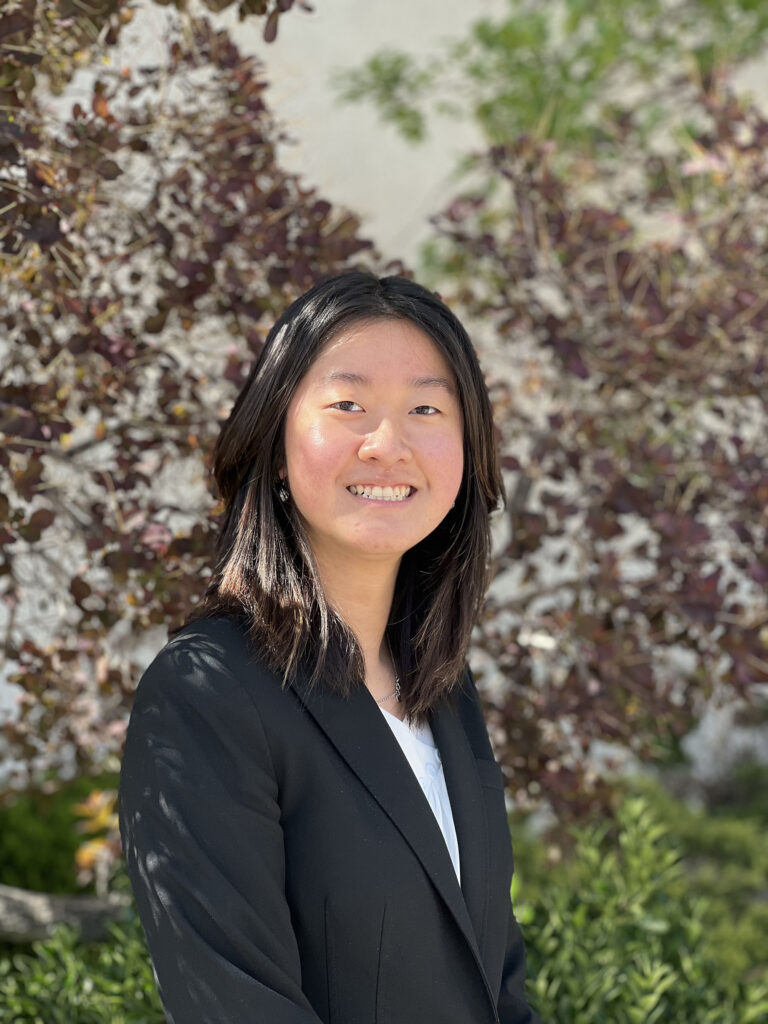 Jolie Shah, a junior from Ed. W. Clark High School, is excited to be serving as the
2022-2023 Nevada FBLA State Vice President of Public Relations. Since her freshman year, she has been a dedicated member of FBLA. The endless opportunities in developing career and leadership skills and meeting a vast array of people in the FBLA community fueled her with passion and determination. This has led her to strive for leadership positions, becoming the secretary of Clark’s FBLA chapter and taking on this state officer position. She has been a Nevada National Qualifier every year since her participation in FBLA and has competed in events, E-Business, Mobile Application Development, Health Administration, Website Design, Graphic Design, and Introduction to Financial Math. She aspires to pursue a career in Psychology and Computer Science and integrate the skills attained from her FBLA experiences to apply them in forming a business. 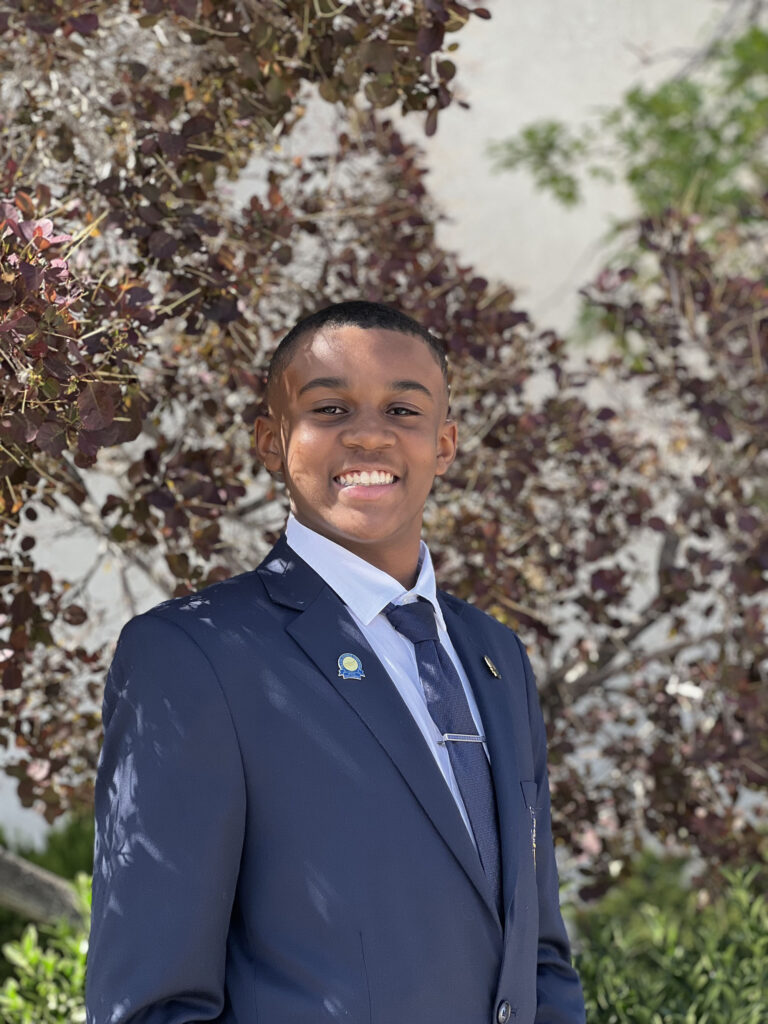 London Gentry is a seventh grade student who attends Faiss Middle School. Currently, he serves as the Vice President of Middle Level. He has been integral to his school community with roles of FBLA Chapter President, Editor of the school yearbook, and student council member. London has placed in SBLC in various events. He enjoys competing in martial arts, swimming, and watching basketball. For high school, he hopes to attend West Career Technical Academy and eventually get a degree in religious studies. He is so excited to use his new position to create more middle school chapters and enhance the middle school FBLA experience.